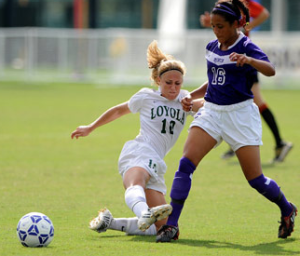 The anterior cruciate ligament (ACL) is one of four ligaments that serve as a main stabilizer of the knee. It’s located between the bottom of the femur, or thigh bone, and attaches to the top of the tibia/fibula plateau, or lower leg.

The ACL is primarily responsible for stabilizing the knee and preventing the lower leg from moving too far forward at the knee joint while doing activities that involve starting, turning and fast deaccelrations. Basketball, tennis, football, volleyball, soccer and downhill skiing all require such movements.

Motivated by the growing occurrence of ACL injuries, especially amongst young female athletes, many coaches are developing training programs that focus on neuromuscular training. By using specific exercises that teach athletes how to land, cut, shift directions, plant their legs, and move during sport, research is showing that more than 50% of all ACL injuries can be prevented. This is especially noticed among girls who tear their ACLs at a higher rate than boys do.

Female Athletes are at a Greater Risk for ACL/Knee Injury

National Collegiate Athletic Association (NCAA) injury data show that female athletes tend to injure the anterior cruciate ligament more frequently than male athletes. The injury rate for female soccer players, for example, is more than twice as high as that for men. Women basketball players are five to seven times more likely to sustain ACL injuries as their male counterpart.

The higher rate of ACL injury among women has been attributed to a combination of factors:
• A woman’s Q-angle (the anatomic relationship of the hip and knee angle) is different;
• Women are more quadriceps dominant and have less hamstring strength than men;
• Young female athletes tend to use the strength of their ligaments (the attachments of bone-to-bone) for knee stability;
• Young male athletes tend to use their muscle strength more for knee stability;
• During adolescence, hormones (such as estrogen) are secreted that can contribute to knee laxity or increased flexibility.

According to the American College of Sports Medicine (ACSM), the earlier young athletes are taught weight training specific to them, the better chance there is of avoiding unnecessary injuries.  A safe, strength/weight training program specific to the physical and physiologic needs of the athlete is necessary to provide him/her with a strong musculoskeletal base on which to build muscular strength and endurance, athletic skills, as well as prevent and reduce the risk of noncontact ACL, overuse and overload injuries.

The most successful neuromuscular training programs consist of at least 15-20 minutes of exercises that include marching, jumping, squatting and side-to-side movement that help wake up the brain and nervous system as well as get the entire body moving with better coordination. A successful program will also include exercises that emphasize core stability and strengthening of abdominal and back muscles to help maintain proper hip alignment.