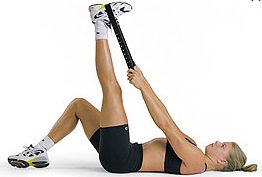 Research is now showing us that static stretching before exercise might not provide all of the benefits that many of us have come to expect. It was previously believed that static stretching lengthened muscles and increased flexibility. However, there is little scientific evidence that actually proves that traditional stretching improves exercise performance, reduces delayed-onset muscular soreness, or prevents injuries.

Static Stretching is a slow, sustained muscle lengthening that most athletes hold for 15–60 seconds. A common hamstring stretch is to lie on your back (supine position) with both legs bent at the knees and with feet on the ground, bring one leg up and grasp your ankle while straightening your leg upwards and towards you. Static stretching is very popular and is incorporated into many pre-competition regimens.

Isometric Stretching is a form of static stretching. Athletes using isometric stretching will contract the muscle while exerting force against a fixed resistance. With the static hamstring stretch, if you were to contract your hamstrings while holding the stretch, some of the fibers in the contracting hamstrings would be further lengthened as other fibers attempted to shorten. The concept is that holding the isometric contraction for a few seconds would then allow increased static stretching to further lengthen the muscle. This technique is also known as resistive stretching.

Ballistic Stretching is a form of active stretching that involves rapid muscle lengthening, often with bouncing or repetitive motions. A typical example is the standing hamstring stretch that involves bouncing downwards as you try to touch your toes. This style of stretching is rarely used due to reports of soft tissue injury.

———
Passive Stretching is a form of assisted stretching. A partner is needed to apply steady pressure to the muscle being stretched to cause a movement that slowly increases the range of motion. An assisted hamstring stretch would involve a partner lifting your extended leg and gently stretching it towards the your trunk. The technique of Active Isolated Stretching (AIS) is a form of passive stretching.

Proprioceptive Neuromuscular Facilitation (PNF) is another form of assisted stretching that utilizes a partner who briefly resists contraction of stretched muscle groups, after which the muscles are relaxed while the partner passively stretches the muscle group beyond its normal range of motion. Again using the example of the supine hamstring stretch, a partner raises the athlete’s extended legs upward and toward the trunk to stretch the hamstrings for about 10-20 seconds. Next, the athlete attempts to contract the opposing or antagonistic muscles (i.e., tries to lower the legs) for about 7 seconds while the partner resists the contraction to inhibit movement. The contracted muscle groups are then relaxed and the partner again slowly stretches the hamstrings, presumably further than the original stretch allowed. This pattern is then repeated several times for optimal range of motion.